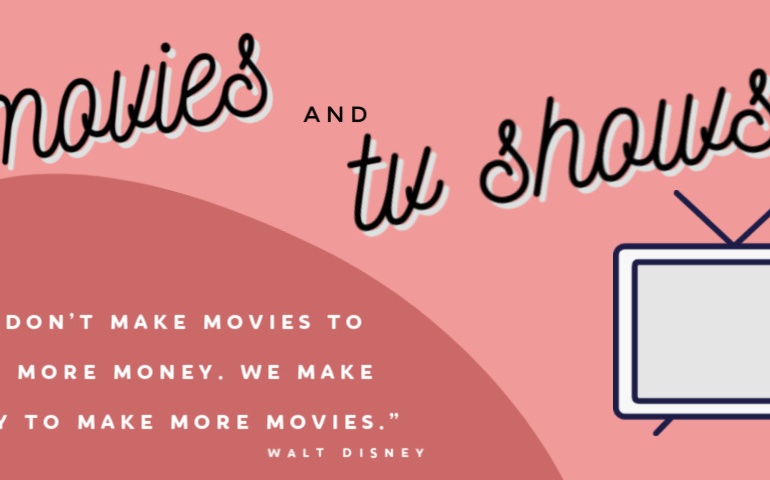 since this quarantine-thing seems to be going on for a lot longer I thought it would be nice to share some of my favorite tv shows and movies I watched during the last few weeks. As well as share the top 3 from my bestie Miri, which you would know from blog post like

I don’t know about you, but in the first few weeks of this all I didn’t do much else besides binge-watching tv shows and movies. If you like I could also write a post about how I got out of the rut and into doing actual productive things. It wasn’t very easy, and I still have some days where I don’t do anything, but most of the time I am actually staying quite busy.

Now, I have a few tv shows I have watched during quarantine. Some of them I’ve finished, some of them I’m watching while puzzling and some I can only watch the weekly episodes.

My Top Tv Shows during Quarantine

Community is great if you want something in the background while doing some household stuff or while your puzzling, it’s also super funny which lifts your mood like nothing. I binge watched the entire season of Locke & Key and am super excited for the news about a season two. I really enjoy watching Station 19 and have to say that season 3 is by far my favorite so far. Station 19 also inspired me to start watching Chicago Fire again.

Z Nation is just a really entertaining zombie apocalypse show which in the current situation is a little morbid, but the show is just too good. Last but not least, I also binge watched I am not Okay with this in one day. I wasn’t sure if I would like it but man I freaking loved it. Highly recommend it!

My Top Movies I watched during Quarantine

I feel like pretty much everyone has seen Contagion by now even though it is probably the worst movie to watch while in quarantine, but it is just really good. I love a good Jason Statham movie and that includes the animal movie The Meg. I really like this one I feel like it has a good structure to it and is quite entertaining.

I recently rewatched not only the original movies from Jurassic Park, but also the second one from the newer one. They are just classics and really entertaining. I wanted to see Snowpiercer for a real long time and finally got around to watching it and it was so good. The whole story line is super intriguing and I really like the fact that it’s shot in one place. Last but not least, I watched Lost Girls. This one is definitely not a feel good movie but I am a sucker for a real life event movie and this one is just horrorfying. Really should watch it if you are into real crime movies.

Here are the three top movie Miri has watched during this time: Aus dem Nichts, Frank and The Purge. She also loves to watch TV Shows and recommends the following:

What are some of your favorite things to watch? Tell me in the comments, I’m always down to try some new tv shows.

Hey my loves, I hope you love my blog as much as I do. Please enjoy the weekly blog entries and be excited for a lot more to come. XoXo, Jasmin. View all posts by Jasmin

2 thoughts on “What I am Watching During Quarantine”

This site uses Akismet to reduce spam. Learn how your comment data is processed.

Hey my loves, I hope you love my blog as much as I do. Please enjoy the weekly blog entries and be excited for a lot more to come. XoXo, Jasmin.

let’s leave this world behind richer, happier and better ✨
À vaillant coeur rien d’impossible.
Cloudy days ☁️
let’s do what we love, and do a lot of it 🧡
i love places that make you realize how tiny you and your problems are.
art is chaos taking shape 🎨